I ran out of time in the morning, which happens fairly often, so I ate a blueberry Rx bar for breakfast… and I was starving two hours later. (I had another one after lunch because I was fading fast at 2 p.m.) Thankfully, I had a busy morning and four or seven cups of coffee to keep me going.

I inhaled a leftover pork chop and handful of sweet potatoes from Sunday night, which reheated super well. Then, I devoured a side salad that more resembled the size of a full dinner salad of arugula, Romaine, chopped walnuts and cherries, which I pitted sans cherry pitter. 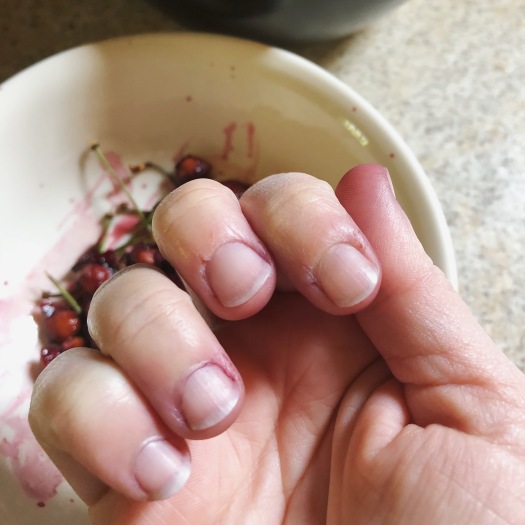 My fingernails are still pink.

This salad was so good, I made it again for dinner alongside some chicken thighs that I had to dip in stone-ground mustard because turmeric is not a strong spice, in case you didn’t know.

I woke up early enough to make breakfast Tuesday, but it was too early to eat. I need breakfast, but I don’t need it before the sun comes up.

…so I ate a blueberry Rx bar.

I sense a pattern.

I also drank a Bolthouse Farms B Balanced Sweet Green Smoothie, which I’m pretty sure is Whole30-compliant, but I can’t be completely sure. It has no added sugar. 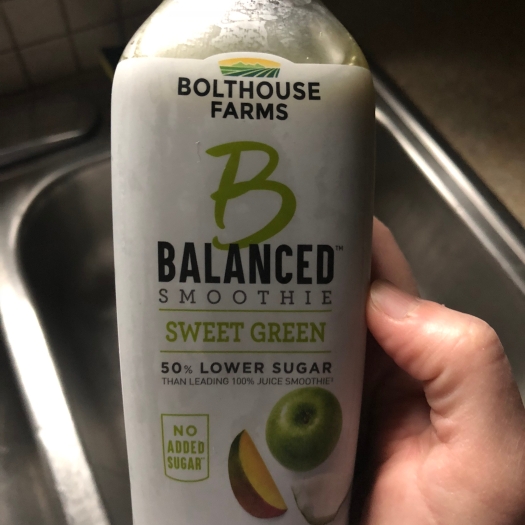 It even says so.

Whole30 does prefer you eat your calories over drinking your calories, but I was tired and not hungry enough to make and eat eggs at 7 a.m.

Lunch was leftovers again. Those pork chops are definitely staying on the menu; they taste good and keep so well.

For dinner, I planned a family favorite: Roast Sausage with Potatoes, Peppers and Onions. It’s a sheet-pan meal that takes little to no preparation, and it’s tasty, especially with a side of spicy ranch.

I can eat potatoes, peppers and onions. I cannot eat the mild Italian sausage I use. Why? I have no idea what’s in it, but I’m positive it’s not compliant.

I made the meal as usual, with the non-compliant mild Italian sausage. For my husband. For myself? I sliced up leftover chicken-apple sausage we’d eaten Saturday night, reheated it in a frying pan, and then fried an egg in the sausage… juice? Fat? I dunno. You pick whichever one sounds less weird. 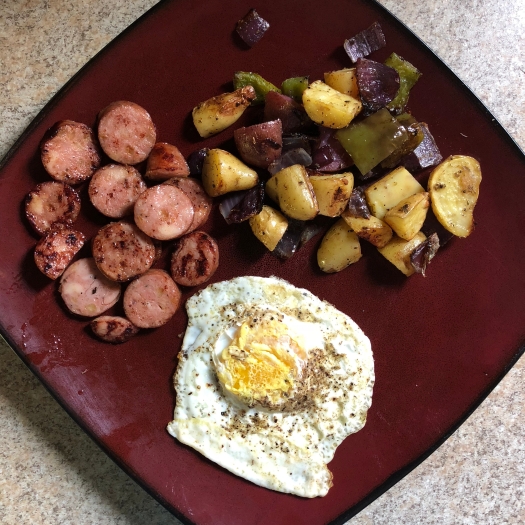 Pretty tasty, and the runny egg yolk made a substitute for the spicy ranch. I say “a substitute” because it wasn’t a better option… just an option.

I’m nothing if not predictable.

I also forgot to prepare lunch before leaving for work, which is equally predictable, so I had to wing it. Previously, winging it involved a microwaved black bean burger, whole avocado and two servings of cottage cheese. (I really like cottage cheese.)

Whole30 winging it is a packet of tuna and an avocado. 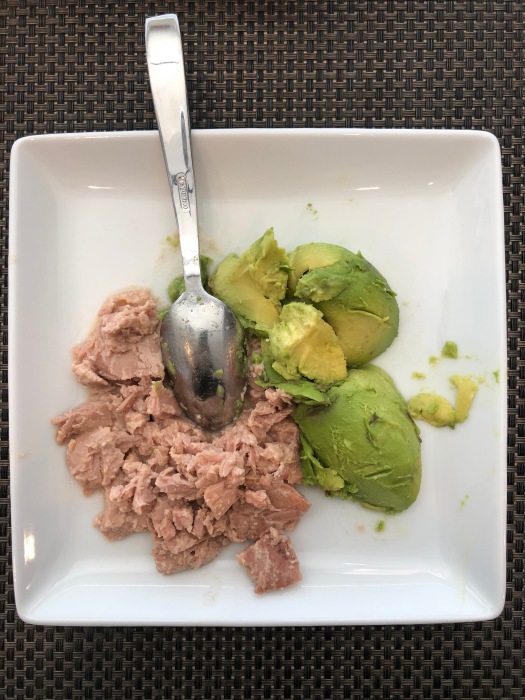 Crackers, pita, tortillas, any bread… might have made this more edible. And, oh my, have I wanted some gluten.

Thankfully, my husband made a delicious dinner we devoured in minutes. Venison steak and a mixed greens salad with cucumbers, strawberries and sliced almonds. It was perfect… except for one small thing.

My husband cooks steak in butter.

I also ate a pound of strawberries, I’m sure. Suuuuuggaaaaaarrrrrrrr.

Wednesday: Not Compliant (but compliant enough for me)

Another morning, another blueberry Rx bar, and another Bolthouse B Balanced Sweet Green Smoothie.

These things are seriously good, but I miss my organic toaster pastries and Bolthouse B Strong Coffee Protein Smoothie, which has dairy and soy and whey (probably). 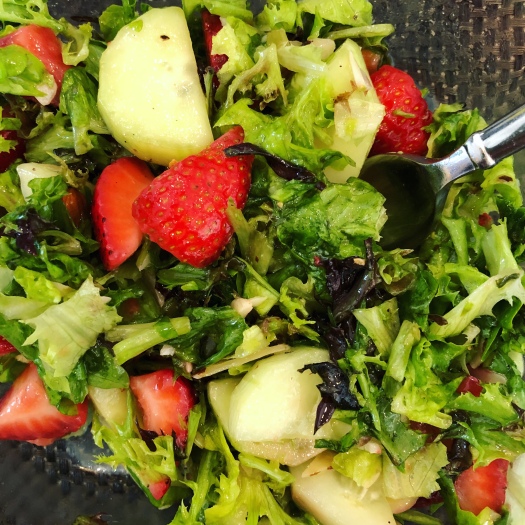 …and a packet of tuna and a whole avocado. Turns out, lemon-garlic salad dressing puts a good mask on the cat food-ness.

Now, for dinner — and a situation I was sure I’d run into: long day, exhausting toddler, too tired to cook and clean. What’s the solution?

I stopped by Jimmy John’s to get my husband a sandwich, and I refrained. I can’t eat any of that food. So what was I going to do? Improvise. Next door is Chipotle, which is full of non-compliant food. I did my best: salad, no rice, no beans, meat, salsa, quac, no cheese, no chips, no Mr. Pibb.

The sink mess visible top of frame is major reason I couldn’t bring myself to cook when I got home. I did chop some home(not my home)grown tomatoes to go on top. Made a nice meal and maybe my sixth or seventh salad of the week.

I’m only Whole30-ing for a practice week. How am I going to improvise when I’m the one home all day with a fussy toddler? Ugh.

For dessert, I ate another pound of strawberries because I’m starving, and I really like strawberries.

I almost made it. SIGH.

Friday began the same as every day this week: a blueberry Rx bar and a gallon of coffee. I worked through lunch, munched an apple at my desk and speed-cleaned my house before getting the toddler.

It was a long week. I was hungry. There was a leftover sandwich from Jimmy John’s in the fridge, and I wanted a beer.

I feel pretty good about the effort I put in this week. While I did not enjoy the benefits of reduced inflammation, which is the goal of this little diet experiment, I did discover one not-so-small benefit.

If I lost five pounds in four and half days, how many pounds would I lose in a full 30 days?

What was the cause of my weight loss? Maybe because I didn’t eat ice cream, drink Dr. Pepper or eat after 7 p.m. all week. (I didn’t have a rule for not eating after 7 p.m., but there wasn’t food to have after dinner… except the occasional pound of strawberries… so I didn’t eat.)

More likely, it was a reduction in calories. Salad has fewer calories than French fries, and I ate a LOT of salad.

Monday starts a new week of Whole30 meals before date day at the beer fest with my husband. Maybe I’ll lose another five pounds (not likely), but it’d be nice to keep those five off for good.

One Reply to “Whole30: Practice Week”

Mom arms making up for the complete lack of abdominal strength